All Apple Stores outside of China were closed on March 13, in an effort to slow down COVID-19 transmission. Since then, many countries around the world have slowly started to re-open their marketplaces for the public.

Apple is also re-opening its retail stores while making sure its employees are following all safety procedures and social distancing protocols. However, Apple stores around the world have different timelines for re-opening.

The company is monitoring health data and following government guidelines to make sure that they only re-open stores that seem safe. Local policies about the matter may differ.

Regions where Apple Stores have re-opened are focusing on service and support at the Genius Bar. Furthermore, the company is encouraging all of its users to continue shopping online to avoid unnecessary social contact.

How many Apple Stores are now open?

So far, 98/510 stores have re-opened around the world. All stores in Australia are now open except for Apple Sydney, which is under renovation. Apple Store in Nave de Vero, Italy will also reopen on May 19.

Furthermore, only 5 out of 271 Stores in the US are open right now. Many regions including Canada, Singapore, UK, France, and Mexico do not have any Apple Stores open for the public. However, the company will inform users 2-3 days prior to re-opening its Store.

According to Bloomberg, Apple is also looking forward to re-open 10 of its 17 stores in Italy next week. “We’re excited to begin welcoming visitors back to some of our stores in Italy this Tuesday,” the company stated. Furthermore, the company is not re-opening any stores in  Lombardy and Piedmont, two of the most hard-hit areas amidst the pandemic, and will be following all necessary precautions. 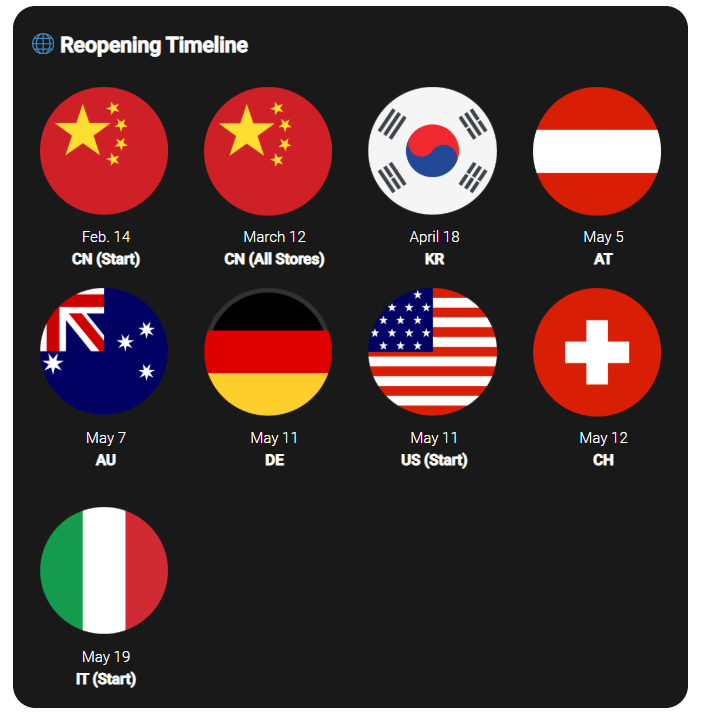 Apple Stores in the United States began re-opening on May 11. They are expected to continue to do so across the globe in the upcoming months.

Apple has also prepared “Today at Apple Home” sessions for users stuck at home. Users can join creative experts from all over the globe and work on fun projects. New sessions are added every day for users to explore.

Apple’s production lines have also restarted mass-producing products and its 2020 iPhone 12 also seems to be back on track. However, given the present circumstances, the company is putting public safety first everywhere.