Apple introduced iOS 5 less than 2 weeks back and released the first beta to developers with over 200 new features. Not long after that, Dev Team managed to jailbreak iOS 5 beta 1 with the same Limera1n exploit used for iOS 4.x which allowed Cydia developers to start developing tweaks for the new iOS. Without a doubt, iOS 5 Notification Center has caught the foremost attention of these developers with back to back widgets and customization releases in the last couple of days. 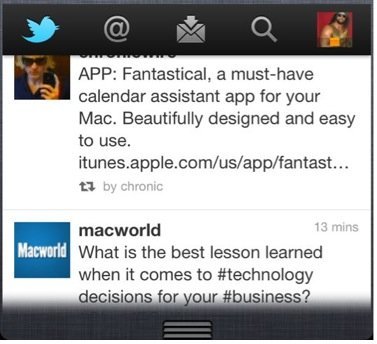 Today, yet another widget for Notification Center came out which integrates your Twitter account into the Notification Center. Its called WeeTwitter and shows you a basic timeline of your twitter stream. Like other widgets, this one also needs you to jailbreak iOS 5 before install. However, it isn’t located on any Cydia repo yet so you need to install it manually using the following steps:

Open up Cydia and Install iFile (shareware is fine).

Click here (while viewing this page in Mobile Safari) and when it asks, open it in iFile.

While prompted by iFile, simply install the .deb file and re-spring.