Yesterday, iOS 4.3 beta 2 was released by Apple to the developer community less than a week after the first beta. It seems that folks at MacRumors have been digging hard around the latest beta ever since and have found fairly solid evidence that pretty much confirms not only a Camera app for the iPad 2 but FaceTime and PhotoBooth apps as well. We already wrote about the leaked iPad 2 Camera.app images earlier which were extracted from the first beta of iOS 4.3 while this new discovery pretty much seals the deal. 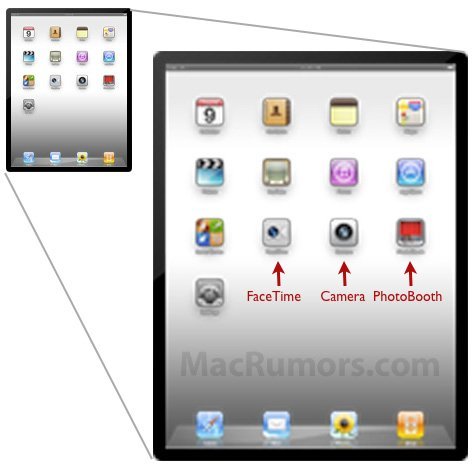 The above image homeScreenOverlayFaceTime~ipad.png was discovered in iOS 4.3 beta 2 firmware by MacRumors which shows a preview of the wallpaper selection. Notice the new icons for Camera, FaceTime, and PhotoBooth. According to MacRumors:

FaceTime will allow iPad 2 owners to video conference with iPhone, iPod Touch and Mac owners. The standard Camera app will allow you to take photographs. We still can’t say for sure if there will be a back camera, as the camera app could possibly be used only for the front camera. Finally, the Photo Booth icon confirms that Apple is including their Mac OS X Photo Booth app which allows users to take fun photos and apply various filters to them.

Meanwhile, don’t forget to check out our complete roundup of all the new features such as video camera effects, new fonts, hardware rotation lock, redesigned keyboard and more which will be introduced in iOS 4.3 here!