We’ve been testing the developers’s beta preview of iOS 5 for last two days and have been more than impressed with how Apple has taken the iOS to a whole new level. Over 200 new features with Notifications Center, iMessage and iCloud being the best of them all. But today, we discovered something we hadn’t seen or heard of in iOS 5 before i.e Unsecured Call alert. While receiving an incoming call from an unknown number with perhaps a blocked caller ID, an alert popup showed on our iPhone with the following warning:

Unsecured Call : The cellular network you are using is not encrypted, This call can be intercepted by unauthorized listeners. 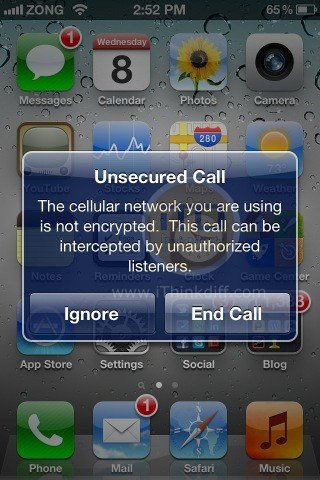 Nonetheless, we ignored the warning and took the call and since then, haven’t seen that popup again. Either it could be a new hidden feature introduced in iOS 5 or it could have been there in iOS all along but we believe the later is unlikely, else we’d have seen it before. Have you found anything new or strange in iOS 5? Don’t be shy and share it with us in the comments section below!