iOS 9 jailbreak has already been demoed as proof of concept in a YouTube video by ih8sn0w, one of the popular figures in jailbreak community. Despite concerns that rootless in iOS 9 might make it more secure and invulnerable to jailbreaking, the contrary has been showed off on video in the form of an untethered jailbreak for iOS 9. 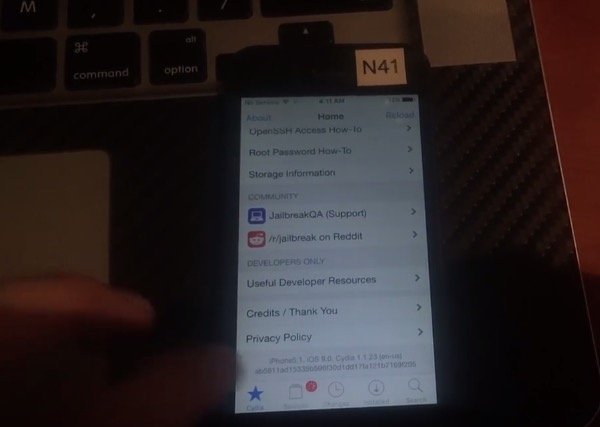 Using the vulnerability, sn0w demonstrates verbose, a custom boot logo, and code injection. He also shows a working copy of Cydia and Anemone followed up with applying a custom theme called Glasklart. He does not say anything in the video so you can probably speed it up to 2x using the controls on YouTube.

sn0w has mentioned the differences between iOS 8 and iOS 9 jailbreaking and found them to be very minor.

Worth noting, iOS 9+ arm64 iDevices now enforce a checksum on __TEXT/DATA.const regions of the kernel through the use of TrustZone. Modifying said sections will cause the device to panic (either at kernel or EL3 will force a reboot if the kernel refused to gracefully panic). Essentially, it’s KPP (Kernel Patch Protection).

Also, there should technically now be two additional partitions (baseband_data [s1s3] and logs [s1s4]) but didn’t really bother with those as they weren’t critical.

iOS 9 has just hit general master release and iOS 9.1 is already in developer beta. It is highly unlikely that a working jailbreak for iOS 9 will be released now because iOS 9.1 is expected to release in November, alongside iPad Pro. An iOS 8.4.1 jailbreak was also demonstrated by the Pangu team but it wasn’t released.

We will keep you updated on any developments on the jailbreaking front for iOS devices.