Now that the iPhone 6s and 6s Plus are out, people everywhere have been comparing them to the previous generation models to see how much of a performance difference there is, in terms of real world usage. It’s one thing to have numbers like ‘twice as fast’ and percentage of performance increase, but what really makes a difference is the real world advantages in simple tasks like app launching, browser speed and overall zippiness of the operating system. 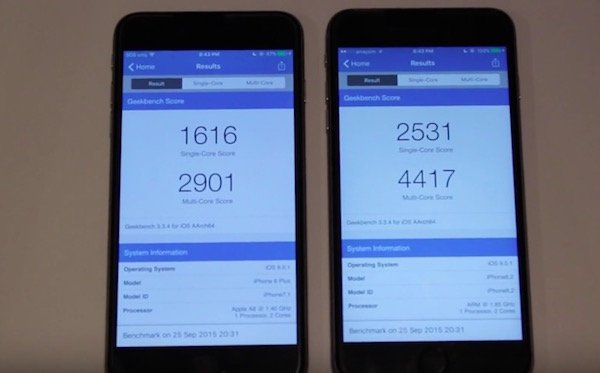 The video puts both the phones through the following tests:

As expected, in most scenarios, iPhone 6s Plus leaves the iPhone 6 Plus in dust. The comparison is not scientific by any means and should not be taken as the best measure of improvements in the new iPhone but it gives a certain idea of what to expect. Another thing is that in typical real world performance, a user does not close all open apps as there is multitasking involved. Also, the video does not compare graphics improvements or TouchID speed improvements. Still, the video is interesting to see and could help you in deciding whether the iPhone 6s Plus is worth the upgrade or not.

There is another video by iDownloadBlog which shows the benefit for 2GB RAM in iPhone 6s. It makes Safari useable thanks to less tab reloading. This means that you can easily switch between tabs and they will load from their existing state rather than refresh most of the times, like they did on iPhone 6 Plus thanks to its 1GB RAM.

Even if you are not upgrading, there are some good news with iOS 9.1 on older iPhones as the new update will some noticeable performance improvements, as per our hands on with the beta.

Update: Here’s another video comparing all iPhones. This includes a boot time test, Safari website loading, Geekbench score, HTML5 test and camera comparison. It’s not a detailed video by any means but it is interesting to see how far things have come along since the earliest iPhones. Important to note: iPhone 4 runs the new iOS 7 user interface and all iPhones since 4s are on iOS 9. You can’t say the same for Android or Windows Phone smartphones.