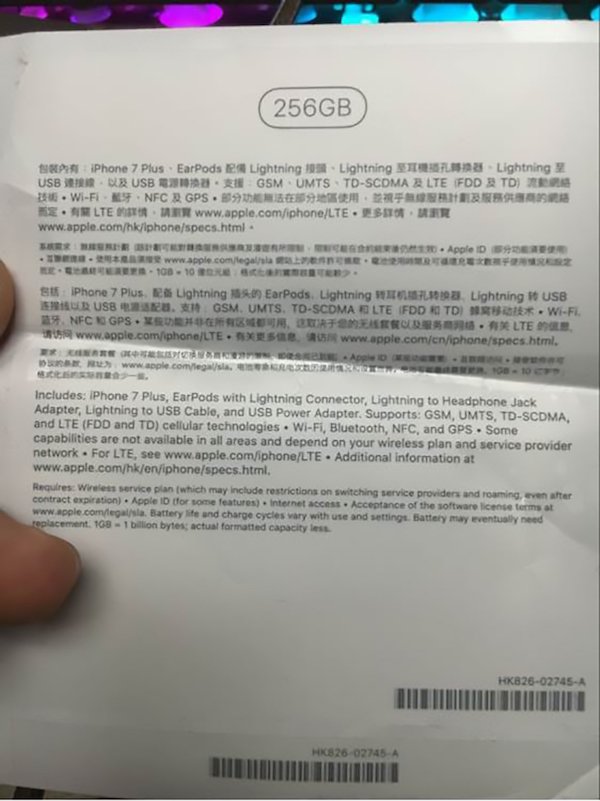 The authenticity of the photo is no doubt questionable, however, it does shed light on many other rumors circulating around the new iPhone 7.

Firstly, the leaked photo mentions the name of the next generation iPhone model. There was a lot of speculation around what will Apple call the new iPhone model, iPhone 7 or an extension of iPhone 6 series. It was also assumed that Apple might hold off the launch of the next generation iPhone 7 till 2017, to launch the new model at the 10 years milestone of the device.

Secondly, the photo reaffirms the shipping of new EarPods with lightning connectivity. Many credible sources had reported earlier this year that Apple will completely do away with the 3.5mm headphone jack and replace it with lightning port based headphones. The claims made in this latest leaked specs photo are validated by Apple’s recent EAEC certification for AirPods, which would be their wireless headphones. Having said that, nothing can be stated for sure until the official event.

A few days ago, a photo was leaked of a larger 334mAh lithium battery for the 42mm model of Apple Watch 2 as well as a list of hardware specs of the new iPhone 7 and iPhone 7 plus models. Reportedly, both the models will have new processors, RAM, and upgraded cameras. Alleged leaked photos of iPhone 7 SIM trays also confirm the availability of a new Space Black color variant.

The feature we are most excited about is the camera, which is expected to provide great low light photography and bokeh, if the September 7th event invite is used as an indication.

Apple event will commence at 10 am (PT) on September 7th, and the hype around the features of the new iPhone 7 have made it the most anticipated event of the year. Stay tuned to iThinkDifferent for comprehensive coverage of the upcoming event.