In the latest round of tests, it turns out that M1 MacBook Pro runs Adobe Premiere Pro video editing software faster than Razer Book 13 which is powered by an 11th generation Intel Core i7 processor and Iris Xe graphics.

Adobe Premiere Pro is usually the only piece of software that runs better on Windows, compared to its performance on Mac. The reason for this is that it is always compared to Final Cut Pro, which is completely optimized for Mac, while Premiere Pro has to be optimized for both Windows and Macs by Adobe, and it does not always end up giving better performance on Apple’s systems. 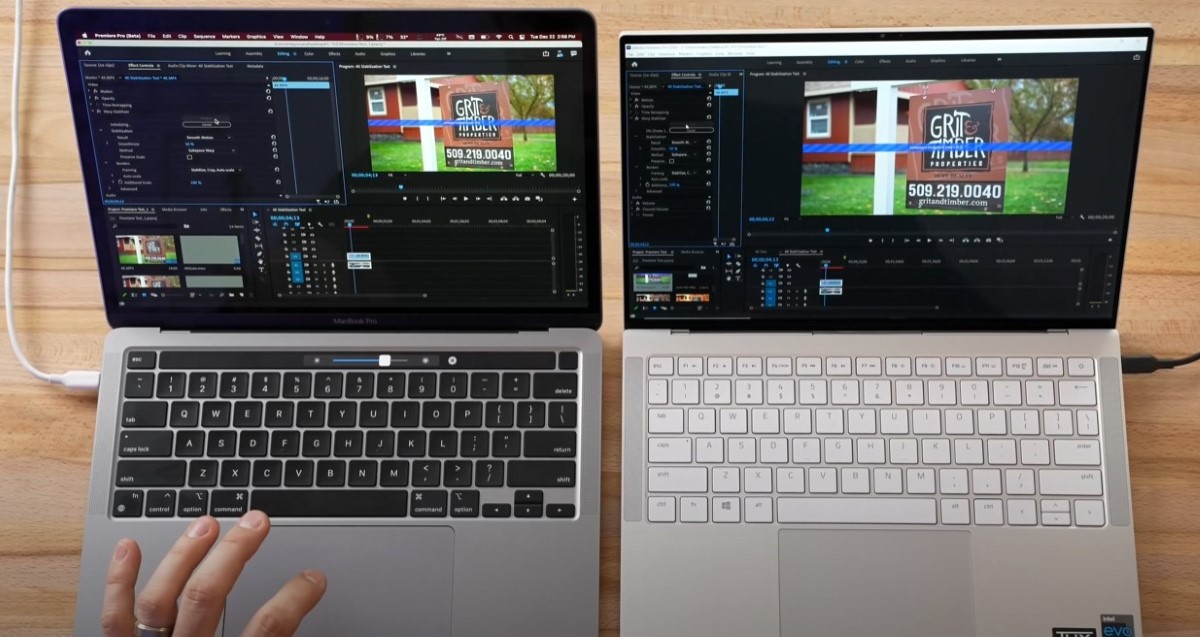 In a new comparison video on YouTube, the 13-inch M1 MacBook Pro was compared against the Razer Book 13 in a bunch of tests that involved video editing software. These video editing apps included Final Cut Pro, Davinci Resolve, and Premiere Pro. Although Premiere runs well with Rosetta 2 on M1 Macs, Adobe currently has an Apple Silicon compatible beta out for Premiere Pro which provides native performance.

The first test included stabilization for a 4k video clip in Premiere Pro. The Mac version was the Apple Silicon beta in this test. Although the MacBook Pro beat the Razer Book 13 by more than a minute, its fans stayed off throughout. The M1 chip managed to beat even a 2019 Mac Pro, which was slower than the Razer Book, by a few seconds. It is important to note that Premiere Pro for M1 is a beta and did not fully utilize the CPU during the test, which means that once it is available as a stable version, performance might be even better.

The next test included Davinci Resolve, which also has a beta available for M1 Macs. This test also included stabilization for a video clip. Davinci Resolve actually crashed a few times on the Razer Book laptop during testing. The test was run again, this time on a Dell XPS, which also features the 11th generation Intel Core i7 chip. As expected, the M1 MacBook Pro was almost a minute faster than the Windows laptop.

In a 5-minute 4K video export test using Premiere Pro, the M1 MacBook Pro was almost 6 minutes faster than the Razer Book 13, which speaks volumes about the performance that Apple’s new chips have on offer. Even in Davinci Resolve, the same test showed the M1 MacBook pro beat the Razer Book by more than 4 minutes. In Final Cut Pro, 4k video export in MacBook Pro was faster by almost 2 more minutes than it was in Davinci Resolve and Premiere Pro.

In other tests such as 4K video playback, Geekbench Metal and OpenCL, the M1 MacBook Pro was miles ahead of the Razer Book. The Intel-based Windows laptop was not only slower, and choppy during 4K video playback, but its fans were also loud through the testing, while the MacBook Pro remained silent. No matter which video format was used for testing, Intel’s 11th generation chip and Iris Xe graphics were not able to keep up with the M1 chip and its graphics cores.

It is also interesting to note that Razer Book 13 costs $100 more than the M1 MacBook Pro, for the same amount of RAM and storage.

Check out the full video below: