Apple’s M1 chip is all the rage right now and has been destroying most high-end chips from Intel in Mac and Windows PCs. But this is one M1 vs AMD comparison where Apple Silicon gets a run for its money. The M1 chip in 13-inch MacBook Pro is put in a contest against Asus Zephyrus G14 with AMD 4900HS chip and RTX 2060 to see who comes out on top. While this is not an Apples to Oranges comparison, it gives a good idea of where the M1 chip stands in terms of performance. 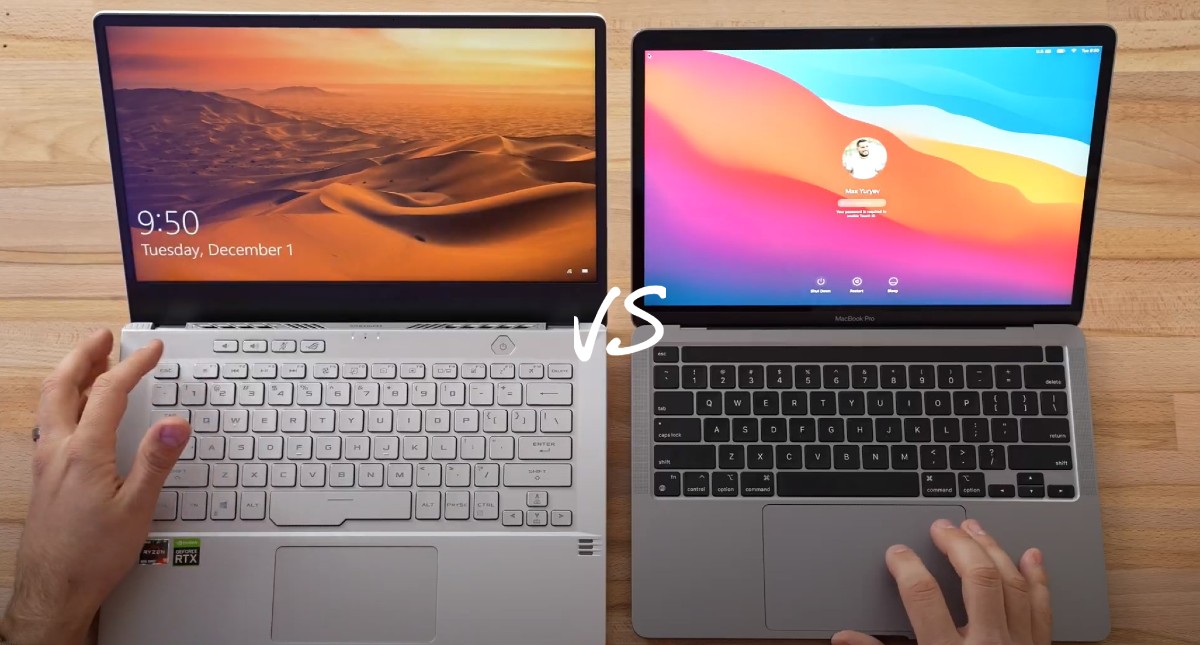 A YouTube video by Max Tech put both these machines against each other, and although the comparison was to be based on the chips in both these machines, the video goes through all their features and specifications. Once you go through the physical differences and display comparisons, you end up with the performance tests.

The first test is for SSD read and write speed, where the M1 MacBook Pro wins, as expected. The storage controller in M1 is simply much faster than most of the competitors out there. In the second test for web browsing speed, the M1 MacBook Pro scored 220, vs 139.5 for the AMD based Zephyrus. It’s not that the AMD machine scores badly here, it’s that the MacBook Pro simply scores a lot more.

In Geekbench 5, no surprise here that the M1 chip beats the AMD Ryzen 9 4900HS chip by a big margin in single-core scores. However, the G14 beats the MacBook Pro by just 5% in multi-core. But when the G14 is on battery power, the scores take a massive hit:

This is not a good look for G14, as a laptop on battery should be able to perform as well as it does when plugged in. The M1 MacBook Pro shows no change in scores, whether it is on battery or plugged in, which is a huge advantage for the machine and shows how power efficient it is, and how much performance per watt it provides.

In terms of graphics performance, the AMD Zerphyrus G14, powered by an Nvidia RTX 2060 6GB dedicated GPU simply destroys the M1 MacBook Pro, whether it’s plugged or unplugged. In Cinebench tests, the AMD chip was ahead of the M1 chip, however, the difference reduced considerably when the G14 was unplugged.

In Lightroom, which is not native to Apple Silicon yet and runs through Rosetta, M1 MacBook Pro beat the AMD-based Asus Zephyrus which was surprising. In the end, the MacBook Pro lost out to the Zephyrus G14 in a few tests that involved video editing and exporting.

What this comparison tells us is that the AMD chip is a worthy competitor to the M1 chip, but Apple Silicon is more suitable for day-to-day usage. Whether unplugged or plugged, you get the same fast experience on an M1 Mac. The tests also show that Apple’s integrated graphics are no match for dedicated GPUs at the moment. It makes us even more excited when we look towards the M1X 16-inch MacBook Pro which is when Apple will have to provide an alternative to the dedicated AMD GPUs that it currently uses.