Microsoft has announced its Windows 10 devices event to be held on October 6 at the Skylight at Moynihan Station in New York City. The event will show off Microsoft’s hardware updates. As per rumors and expectations, the long awaited Windows 10 Mobile Lumia phones could be announced, along with Surface 4, Microsoft Band version 2, and there would likely be some news about Hololens.

As per Mary Jo Foley, Lumia 950 and 950 XL will be the main attractions of the event. These will be Microsoft’s own first party Windows 10 Mobile devices and we might get to find out when the new smartphone operating system will make its way to the public. Currently, Windows 10 Mobile is still making its rounds amongst Insider Preview members.

The next big thing is the Surface 4. Freshly after iPad Pro‘s announcement, it will be interesting to see how Microsoft one-ups Apple’s beast of a tablet. Even though Microsoft representatives were at the Apple event to show off Office updates for iPad Pro, it will be nice to see Surface 4 show off some major new innovations to lead the way for hybrid devices. As Microsoft has committed to keeping support for existing Surface docks and accessories, don’t expect to see major design changes but more like improvements on the hardware design they have perfected. Internals should likely have Intel’s new Skylake processors for a major performance and battery boost. 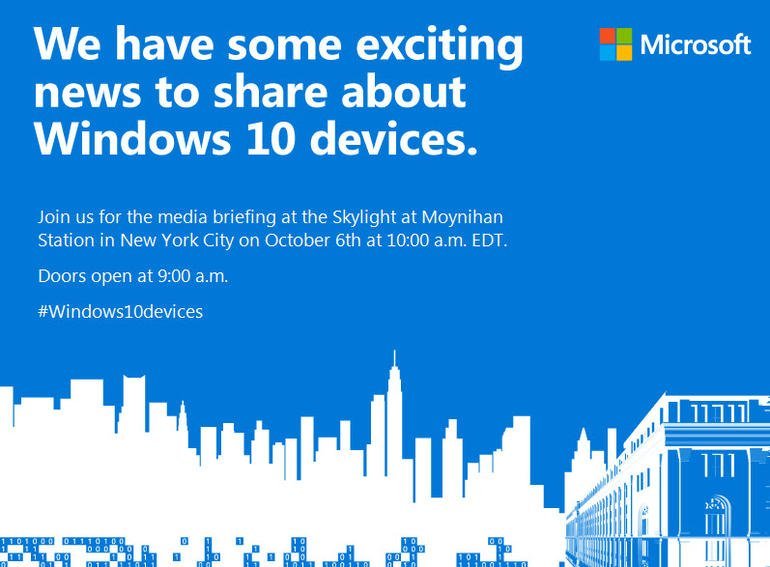 Microsoft’s Band version 2 might also take the stage however there have not been enough rumours on what updates it might get. In the era of smartwatches like Apple Watch and Android Wear, it would be great to see a more functional wrist wearable from Microsoft. More competition is always good for the consumer.

I assume that Hololens will also be demonstrated in some form. Perhaps as an updated hardware revision or design improvements. It is Microsoft’s next big bet so it should likely be part of the announcement for an event revolving around Windows 10 devices.

Xbox One is also getting Windows 10 with the new Xbox One Experience update so perhaps it might also make an appearance on October 6.

We will keep an eye out for the announcement from #Windows10devices. A live stream would also be available and we will share it when it’s announced by Microsoft.