Apple will be launching a new 12.9-inch iPad Pro with mini-LED displays, faster M1-chip class performance, improved cameras, and Thunderbolt port in April. Some of these updates will also be available on the smaller 11-inch iPad, like faster processor and camera improvements. However, the design on both the new iPad Pro models will remain unchanged. 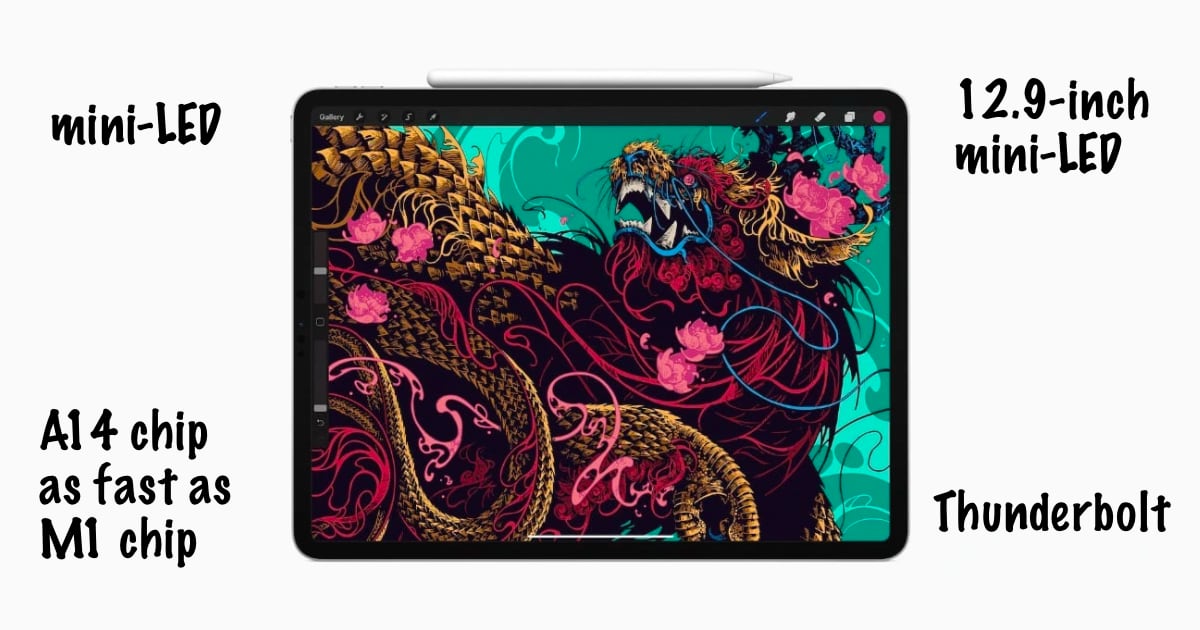 The new report comes from Mark Gurman of Bloomberg, so we would mark this as highly reliable. After the introduction of the new iPad Pro design in 2018, this will be the biggest update that Apple will bring to its high-end tablets. The 2020 iPad Pro was a relatively minor update, with not much worth upgrading to. However, it seems that Apple is throwing the kitchen sink at this new iPad Pro update in April.

In terms of performance, Apple is looking to include faster new processors, which should have performance comparable to the M1 chip in the new Apple Silicon Macs. As we have covered this many times before, Apple Silicon chips have amazing performance, and this should mean that the new iPad Pro will be faster than most Windows laptops in the market. Apple will also add Thunderbolt support to the USB-C port in the new iPad Pro models, which should allow connecting faster accessories like external SSDs, displays, and more.

For the first time, Apple is also differentiating between the features available on the 12.9-inch and 11-inch iPad Pro models. The larger 12.9-inch model will feature a mini-LED display, first for any Apple product. This should give the display higher contrast ratios, brightness, and better colors.

Other sources like DigiTimes have also pointed towards a Q2 2021 launch for the new iPad Pro. Oddly, these recent reports do not mention the inclusion of 5G cellular networking in the new iPad Pro models, which was part of rumors from last year.

The company is also working on the regular iPad, its cheapest in the line-up, and will release a new updated version later this year. Bloomberg reports that a new iPad mini with a larger display will also launch this year. It has been reported that Apple will use an iPad Air-like design for the iPad mini, which should not only make it look modern, but also move the Touch ID sensor to the power button, and allow for a larger display.

Other products still being developed include AirTags, Apple Silicon iMacs and high-end MacBook Pro models, new AirPods, and next-generation iPhone and Apple Watch models, which should launch later this year.