Just before the launch of iPhone 4, Apple had told in an official statement that white iPhone 4 models  are a little bit more challenging to manufacture than the black iPhone 4. So, it was announced that the white iPhone 4 would be available after mid of July. But during the iPhone 4 launch in UK, two white iPhone 4 were spotted in a video by Sky News, way before its was supposed to be launched. Later it was found out that those were review units of white iPhone 4 and they were not given to regular iPhone 4 buyers. Steve Jobs has announced in the special press conference for iPhone 4 today that they will start shipping White iPhone 4 by the end of July. 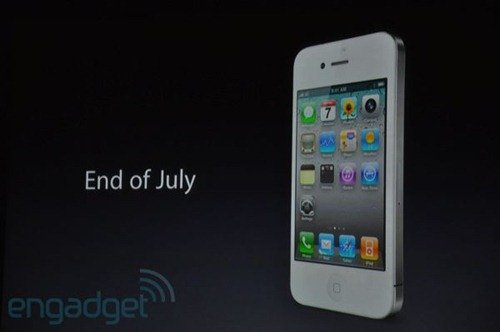 We’re tracking some problems with the proximity sensor and we’re working on it. White iPhone, we’re going to start shipping at the end of the month.

So the final news for users who were waiting for white iPhone 4 to launch in mid July is that they would have to wait for two more weeks but the good new for them is that they will get a free iPhone 4 case with it. We hope that the proximity sensor issues would be solved by that time.