Facebook has just announced it is launching a new PR campaign that will highlight the importance of personalized ads for small businesses. The new campaign indirectly seems to be an attack on Apple’s upcoming App Tracking Transparency (ATT) feature. ATT is an upcoming iOS 14 feature that will require apps to ask for a user’s permission to opt into tracking for personalized ads.

Companies like Facebook have not been shy about their stance on Apple’s ATT update. Starting with iOS 14.5 and iPadOS 14.5, apps will be required to show users a prompt that asks for their consent to be tracked across other apps and websites. As mobile advertisers believe that most users will opt-out of tracking, Facebook argues that it will drastically affect personalized ad revenue.

The campaign titled  “Good Ideas Deserve To Be Found” shines a spotlight on several advertisers that have developed their business on Facebook and Instagram, such as Houston-based handbag brand House of Takura. The campaign will include TV, radio, and digital advertising.

“We’re introducing Good Ideas Deserve To Be Found, an initiative that highlights how personalized ads are an important way people discover small businesses on Facebook and Instagram, and how these ads help small businesses grow from an idea into a livelihood.”

According to a recent Facebook survey of small businesses, 47% say they’re not sure if they’ll be able to survive the next six months. In conjunction with the campaign, the social media giant is also rolling out several small business-related product updates to its platform. 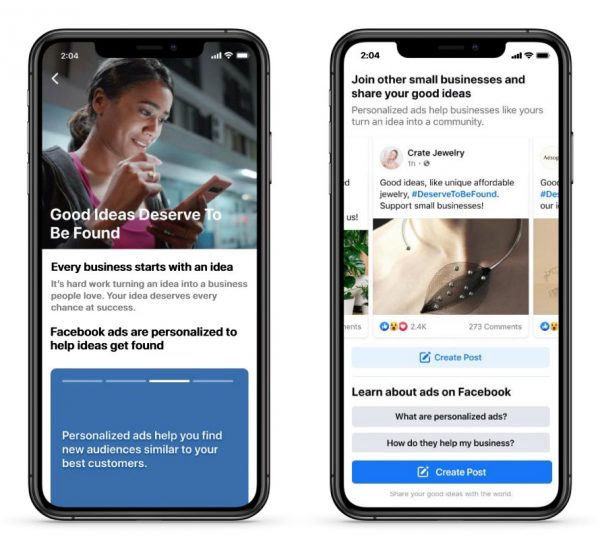 On Thursday, the company said it will launch an Instagram sticker and Facebook hashtag “DeserveToBeFound” to let small businesses share and advertise their products across both platforms. The company is also working on making Ads manager easier to use and redesigning the dashboard that gives users an overall view of their campaign performance.

In addition to this, Facebook will also waive fees for small businesses using its Checkout on Shops feature through June 2021 and all fees associated with the paid online events feature at least through August 2021.

Facebook has previously published an ad titled “We’re standing up to Apple for small businesses everywhere,” in three leading newspapers claiming to fight for small businesses by standing up to Apple’s harmful ATT feature. Not only does the social media giant fail to see how Apple’s privacy feature is meant to protect user privacy by giving them more control over their data, but its ad campaign included a lot of inaccurate data that is not supported by any evidence.

Check out the ad for “Good Ideas Deserve To Be Found” down below: