Apple has released the fourth developer betas for iOS 10. The new releases are available as over-the-air updates as well as via Apple Developer Center to download for registered users. 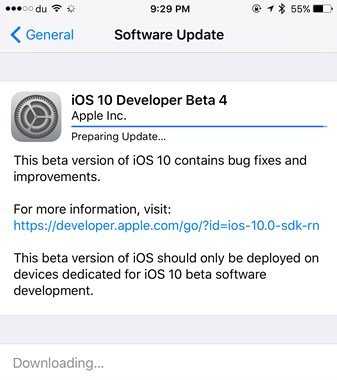 iOS 10 beta 3 was released to users around 2 weeks back with a number of changes and bug fixes.

Users can upgrade to iOS 10 developer beta 4 by any of the following methods:

We have been playing with the new beta for a while. Here is what’s new so far in IOS 10 beta 4:

iOS 10 was announced at WWDC 2016 with tons of new features which include a brand new iMessages, third party developer integrations for Messages, Maps, and Phone apps, updates to Notes, Health, and Apple Music, 3D touch enhancements along with widgets in Quick Actions on home screen icons, redesigned notification center and widgets and a lot more.