Folks, if you’ve been waiting for ultrasn0w unlock to work its magic on your iPhone 4 running latest basebands (3.10.01, 2.10.04) then this news is for you. @MuscleNerd of iPhone Dev-Team has just confirmed on Twitter that an update to ultrasn0w unlock will be released only when iOS 4.3 or iOS 4.2.5 (whichever is last) has been released publicly by Apple. Now, the only question is..when is iOS 4.2.5 or iOS 4.3 gonna come out?

Here is what MuscleNerd tweeted:

“Official iPhone unlock statement: no unlock will be released until after 4.2.5 or official 4.3 (whichever is last) is out” 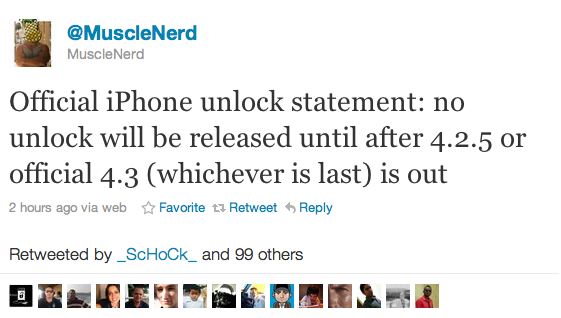 The latest version of ultrasn0w unlock supports the following basebands:

If your iPhone 4 / 3GS / 3G is on any of the above basebands, you can unlock it using the easy step by step guide posted here using ultrasn0w 1.2.

Stay tuned as we’ll keep you posted once an ultrasn0w unlock update is officially announced by the jailbreak community.