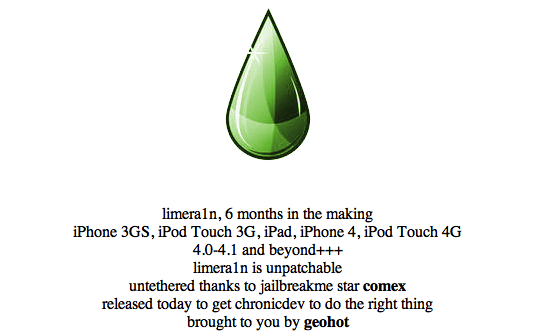 GeoHot has just released his Limera1n jailbreak for all iOS 4.0, 4.1 devices. Currently he has only posted the following update on his website Limera1n.com which does not reveal much details at the moment:

limera1n, 6 months in the making

untethered thanks to jailbreakme star comex

released today to get chronicdev to do the right thing

brought to you by geohot

that’s the price of unpatchability

as usual, donations appreciated but not required

zero pictures of my face

It now appears that GeoHot wanted his jailbreak to be released instead of the SHAtter exploit since the newer iBoots show his hole fixed. There are reports of “unstable jailbreak release” by few early testers of Limera1n. We have not yet tested it on any device so use it at your own risk and let us know how it goes in the comments section below!

UPDATE 1: GeoHot has just updated the official Limera1n.com website to say that 3GS new bootrom is broken and fix pending. So iPhone 3GS users with new bootrom, please stay away for the moment. We’ll update you when its ready!

UPDATE 2: Our guides are up: